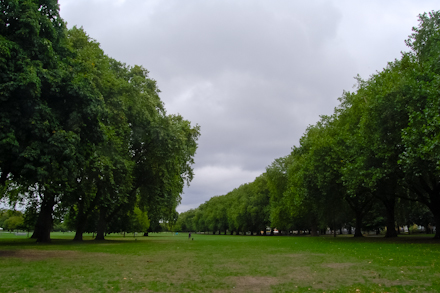 Predictably, Nikon servicing came back with an all-clear for the 2omm F2.8 lens, there was nothing wrong with it as far as they could see. Therefore, I decided to go into the local park with a couple of bodies and a few lenses to make comparisons.

The weather was awful – drab and overcast, but at least it wasn’t raining and I lugged the gear around the park for an hour looking for a spot that would enable me to test focus range and CA. Naturally, after all the walking around, I ended up in the spot I started from – a view of a nice sweeping line of Plane trees, so I set up the tripod there and set to work.

The lenses to be compared were:

I tested each of these lenses on my D5000 and Fiona’s D40 to ensure there were no camera issues influencing the comparison.

For each lens I took a sequence of shots;

… and set the focus manually for each aperture to;

I set exposure manually, using my trusty Sekonic L-398A Studio Deluxe III light meter. (You need to do this for the AI lens, in any case.)

I was quite surprised by the outcome, there wasn’t much in it, but the better lens, in my opinion, in this comparison, was the 18mm-55mm D40 kit lens. The new 20mm was a little better than the old 20mm F3.5, but not by much, and some of the differences could be explaind by differences in exposure. In fact I was so surprised by the performance of the kit lens from the D40, I went and ordered a Nikon DX 18-55mm 1:3.5-5.6 VR lens from Amazon. It’s the kit lens with the D5000  which I had not ordered when I bought the D5000 as I wanted a 20mm prime (to use as 30mm), pending the purchase of a full-frame DSLR.

When it arrived, I popped back into the park to try out the new lens in the same spot. I wasn’t wrong to get it. See the comparisons below – all are F11 set at infinity. (click images for full-resolution) 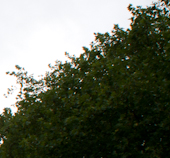 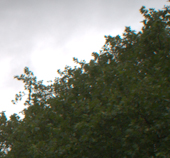 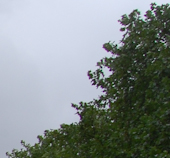 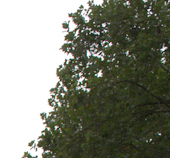