back on the trail

I’ve barely been out of the house for the last five weeks, mainly thanks to having too many DIY projects on the go and, consequently, I’ve not been on any new walks – at least until last Sunday.

Actually, in the previous week, I had made an attempt to go for a long walk along the north Kent coast, but I’d been defeated by the weather. I know that sounds wimpy, but if you’d been there, I’m pretty sure you would have agreed with me and turned back, like I did, after a couple of km. Horizontal hail and ferocious gusts of wind aren’t the ideal environment for cameras and I hadn’t dressed for the kind of weather I’d normally expect to encounter in the Highlands of Scotland. 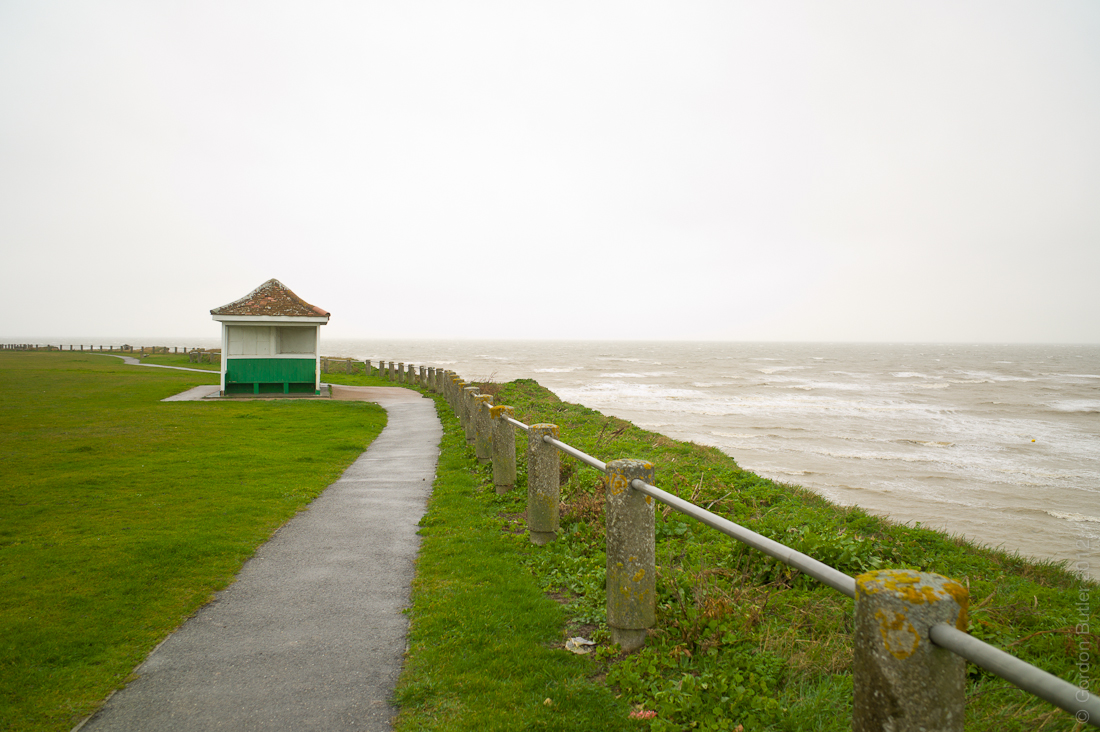 – it’s a lot rougher than it looks

Anyway, just over a week after the first try, I decided to re-attempt the easy 18km walk from Birchington-on-Sea to Herne Bay, via the Roman fort and monastery of St. Mary at Reculver.

Sunday’s weather was the antithesis of the previous week – warm sunshine, dead calm and a curious sea mist that obliterated the horizon and merged the sea into the sky. It seemed an ideal opportunity to get some great shots.

I was also pretty anxious to get out and shoot some serious stuff on the Leica. I’d attended a Leica M9 owner workshop a few days earlier and I’d been given a lot of useful tips and strategies for using the M9 – and I wanted to try them out.

Sadly, it seems five weeks away from the viewfinder has had an impact – my photos on the day are awful. However, I am pretty sure I know why things went so wrong.

Having spent a good few weeks thinking about issues to do with paint, plumbing and carpentry, I wasn’t mentally prepared for being back out with a camera. I’ve taken very few photos recently (even casual) and I’m badly out of practice. On the day, I wasn’t seeing potential images and I had few ideas about the sort of things I was looking for. And, despite the weather and the scenery, the landscape didn’t inspire me. This part of the coast is a flat, featureless landscape dominated by a sea wall, which is topped by a broad dull strip alternately made of tarmac or concrete. There were a lot of people around too, particularly cyclists, which should have offered some photographic potential, but I was out to get landscapes, not street snaps. I just didn’t have the ideas.

technical issues
I also took a technical step backwards on this trip. I had taken on board a number of tips and camera settings learned in the workshop of the previous week and I had applied them during the walk. At the time of the workshop, I saw how these ideas could apply to working in the field and I wanted to give them a go. Unfortunately, I did not apply what I had picked up during the workshop intelligently.

For example, one tip was always to return the lens to infinity after shooting a sequence (back to four o’clock on a tabbed lens) and then to pull the subject into focus when setting up the next shots. The problem with this approach on Sunday was that the subject was often distant (ie near infinity) and there was a considerable amount of haze which meant that the rangefinder was pretty much useless, there were no sharp edges on the subject (or in the region of the subject) to align. God knows what images an AF DSLR would have made in these conditions. In these conditions, zone-focusing is probably the better technique to use. However, I persisted with the recommended technique and slavishly tried to focus on whatever subject I was pointing the camera at. With the result the image was rarely in sharp focus. I have discovered that there is a marked roll-off in sharpness on either side of the centre of the zone of focus (although that depends on what one considers what is acceptable sharpness). Even if, say, the range 5m-infinity is indicated on the lens scale, the actual zone of sharpness will be around the centre of that range and, with a lens focused on infinity, you will only get half of what you could have had for a given aperture. On the day, I knew this, but decided to ignore what my experience told me. After all, I’m far less experienced than the photographer who ran the workshop and I’m acutely aware of my inexperience with the Leica.

It was a similar story for some other tips I tried to use on Sunday. I implemented them without truly considering their consequences, with (un)predictable results. That’s not to say the tips and ideas that I picked up in the workshop don’t work, they just didn’t work in the circumstances I often found myself in on Sunday.

From a portfolio perspective, the walk from Birchington to Herne Bay, could be judged to have been a failure. However, it has been said many times that one learns more from one’s mistakes, than from one’s successes. So maybe I should consider the day to be a success. In any case, the weather was jolly nice, it was good to get out for a long walk and the pub at Reculver was a welcome surprise.

On balance, I reckon it was a pretty good day.