I’ve walked well over 125Km with my Leica M9-P in the last few weeks and it’s now time to take stock. What did I do? What have I learned? What have I accomplished? What do I do next?

Although I’ve mentioned the walking project before, It’s worth going over its purpose as I’ve not previously explained it in any detail.

I got my new Leica in early December 2011 and, thanks to a winter cold, I didn’t get out with it for a few days. However, when I did and saw the results, I realised I had a lot to re-learn. I’d become lazy. I’d fallen into sloppy photographic habits and relied far too much on whatever camera I was using to set the shooting parameters. Effectively, I’d stopped thinking about the photograph. Something needed to be done.

It was clear to me that I needed to get used to a new way of shooting  (actually, an old way – it’s much more like shooting with  film) and that would take some practice. A lot of other photographers have said the same, when they first picked up a digital Leica. I wasn’t going to improve very quickly if I stayed at home and read a bunch of manuals. So, I came up with the idea of going out on walks around London and shooting snaps. Exercise for the brain and body.

I chose to walk in the countryside not in town. This was so I could get away from familiar areas, it would also provide me with the opportunity to practice in relative privacy – without too many passers-by casting quizzical glances every time I looked through the viewfinder. Something I’d experienced rather too often (and worse) when out photographing pubs. And, of course, it’s nice to get out in the countryside, whatever the time of year. The walks were easy to find, there are dozens of web sites devoted to walking and hundreds of walks to go on, some a lot closer to London than you might think. With my programme mapped out and a few potential companions recruited, I set out in mid-December last year on my first walk.

The first walk was a pleasant surprise – lovely winter sunshine, nice countryside with a variety shooting conditions, only a short drive from my home in East End. After the first few steps, I realised this could be my first project using the Leica. I could put together a portfolio of shots documenting the route of the walks I’d planned, recording the weather, conditions and landscape as I progressed. When I got back home I was already looking forward to the next walk, which I went on a few days later. Then the Christmas festivities effectively put paid to the project for a couple of weeks – visiting family and friends, Christmas shopping – all the usual seasonal nonsense that obligates one to put one’s life on hold for the duration. However, in the New Year I was back out in the countryside and, within a relatively short time, I’d walked over 100km and taken a couple of thousand photos. 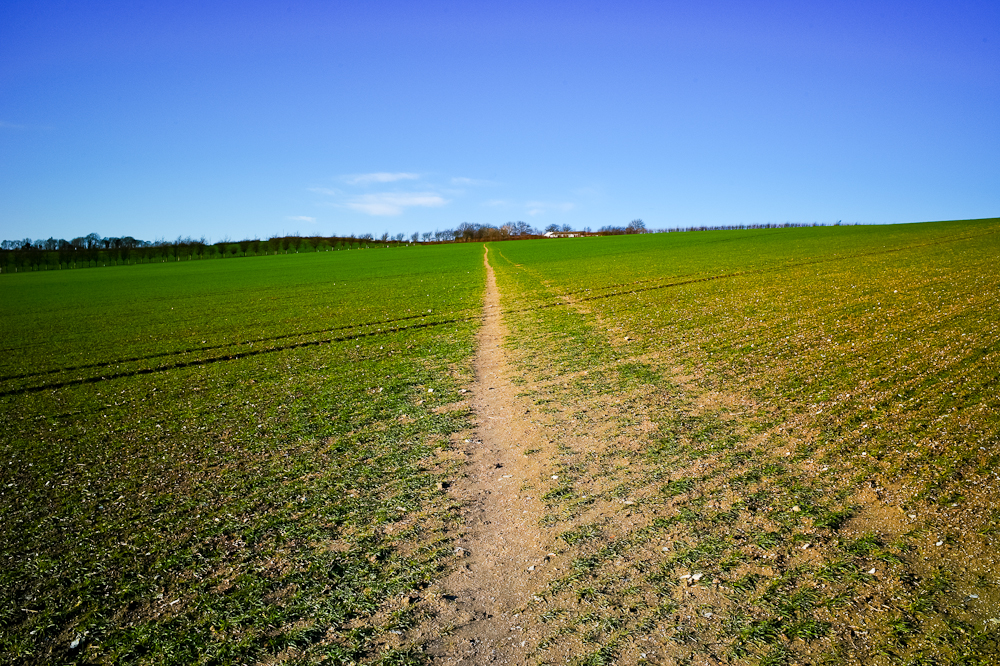 It was at this point I thought it would be a good idea to review my work so far and take stock of what I’ve learned about the Leica M9 and my photography. I ‘ve already outlined my reasons for buying such an expensive camera and now seemed a good time to see if my suppositions were correct.

Before I’d got the camera, I’d read a lot on the web about the M9 and its unique characteristics, so I thought I’d start with the advice of an old favourite, Ken Rockwell. On the first walk, I dutifully set the camera up with his settings, which, for me, turned out to be something of a mistake. There was far too much saturation and contrast – aided and abetted by a suggested manual white balance setting of 6000K, which often warmed things up too much. And I was shooting jpeg, which made the images harder to correct. I shot jpeg to start with, because didn’t see the point in filling up SD cards with crap photos using the much larger DNG format. By the way, I don’t re-use SD cards, I lock them and file them away when they’re full. Digital is a lot cheaper than film and this policy has saved me on a number of occasions. Smaller image file size also meant I’d be changing cards less often – a bit of a pain on the M9.

I found as I did more walks, I was bringing the camera back to its standard settings and things (in my opinion) started to look better. Progress of sorts.

When it came to operating the camera there were good points and bad points. Focusing was no trouble – I’d often pre-focus for aperture and the lens scale is very accurate (unlike some other cameras I’ve used), or else I’d use the rangefinder to focus precisely on the subject, which is a doddle.

But I found the viewfinder, when using the Leica with my 28mm lens, difficult to get used to, especially when attempting to frame shots precisely. The issue for me is the 28mm brightlines in the finder are on the very periphery of the image – in fact I can’t see the entire frame without scanning around. If I press my eye into the finder, in an attempt to see the entire picture, I have trouble focusing on the image. I suspect I need to get a dioptre correction lens – but I’m not sure which one, I’ll have to experiment. I’ve even toyed with the idea of trying a 35mm lens as the brightlines for that lens are easily in view. But I love the compact 28mm lens, I like its coverage and it’s very, very sharp and “get one lens, stick to it” is a useful motto when you’re finding your way around a new camera.

I’m getting used to most of the M9’s quirks by now – eg you can’t lock exposure in soft shutter mode (which perplexed me for a while) and there were many times, when I’d forgotten to check settings before taking a shot. It’s a habit you eventually get used to. White balancing is still sometimes an issue – although I now have a white balance card, which I use at the start of a shoot. And I’ve also set up my custom settings the way Thorsten Overgaard suggests, which I think I’ll stick with for now. Basically, you have to spend some time setting up the Leica to get the results you’re looking for, but once set-up for a shoot, you can forget about buttons, knobs and menus and concentrate on getting photos.

I also found I’m now taking a lot more photos than I used to. In the recent past, even with digital cameras, I was pretty parsimonious with the shutter button – a hangover from my film days when every frame had to count. But the Leica just seems to encourage you to keep on shooting. Strange.

So I’m getting used to the handling of the M9, what about the images?

It was clear, even from my first shoddy jpegs, that this relatively small camera delivers a lot when it comes to image quality. Every time I download a shoot I’m astounded at the quality of many of the pictures. At first, when processing images from the earlier walks, I was doing a lot of work in Lightroom to get an photo that, in my opinion, didn’t look too bad. I was using a lot of presets in the develop module to achieve this (mainly thanks to the wrong camera settings). However, with the images from the the last couple of walks, I’ve hardly done anything to them – just straightened them up and occasionally cropped them a little. You can see this progression, if you look at the galleries from the walks in chronological order.

And the prints from the Leica using my Epson R2880 have also been pretty impressive – again, with very little tweaking. When I get on to more serious work, I’ll be using Photoshop and DxO optics to get the very best out of the files – and the M9 gives me the best possible starting point.

I’ve also got the feeling my photographic style is changing, but it’s too early to tell. One thing I rarely do now is take shots in portait format. I’ve no idea why I don’t, but it’s not often, now, feel the need to up-end the camera for a shot.

In short, the Leica M9-P is a great camera. Yes, it is not cheap, but the best quality rarely comes cheap. It answers most of my needs for an everyday, high image quality camera and more importantly, it feels right. It’s incredibly frustrating when you’re taking a shot and you know that the results just won’t come out as you like thanks to the lmiitations of the camera you’re carrying and I don’t feel this with the Leica. Every duff shot I get is my fault and, usually, I know why it went wrong. For example, I don’t have to discover a previously unknown colour mode, lying in a deeply buried menu that  somehow i managed to activate accidentally (this has happened to me with previous cameras), to understand what went wrong. With the M9 you’re in total control – it does exactly what you tell it to, so you’d better know what you’re doing.

To wrap up this exercise, I’m putting together a book documenting the first 100Km of walks. One hundred photos, one for each kilometre walked. It’s a record of these walks and a marker for future development, something to look back on in a year’s time.

Once the book is complete, I’ll be embarking on more projects. I’ll carry on doing more walks too, I certainly need the exercise – watch this space.

I’ve now walked much further since I wrote this and the project has changed. I’m still  putting together a book, but it’s going to be a lot more sophisticated than the original idea I had for it. I haven’t yet published anything about the project, but there’s a home page for it here.